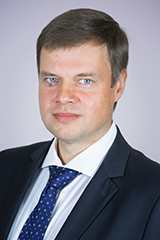 Sergei Glazunov was appointed CEO of Smart Energy in February 2016. Prior to that, from October 2014, he held the position of Smart-Holding’s Chief Investment Officer.

He joined Smart-Holding in 2010 as the corporate development director. In 2011, he became the CFO of Smart Energy and held that office until December 2013 when he was installed as the acting CEO of Smart Energy.

He is also a member of the Board of Directors at Regal Petroleum Plc.