Metinvest Announces Financial Results for the First Six Months of 2014

Metinvest B.V., the parent company of a vertically integrated group of steel and mining companies (jointly referred to as “Metinvest” or “the Group”), announced its unaudited IFRS interim condensed consolidated financial statements for the first six months ended 30 June 2014.

1) Adjusted EBITDA is calculated as earnings before income tax, financial income and costs, depreciation and amortisation, impairment and devaluation of property, plant and equipment, sponsorship and other charity payments, the share of results of associates and other non-core expenses. Adjusted EBITDA will be referred to as EBITDA throughout this release.

2) Net debt is calculated as the sum of long-term and short-term loans and borrowings and seller notes less cash and cash equivalents.

· The Group began rebuilding Blast Furnace No. 4 at Azovstal. When completed, the modernised furnace will ultimately produce an additional 1.5 million tonnes of hot metal a year, while cutting dust emissions by 340 tonnes annually.

· Yenakiieve Steel completed the overhaul of its basic oxygen furnace, improving efficiency and reliability, while reducing environmental impact. The work was completed ahead of schedule.

· Metinvest launched its 2014 “We Improve the City” social investment competition in nine cities in the Donetsk, Dnipropetrovsk and Luhansk regions. The annual competition allows local stakeholders to select and obtain funding for projects that promise to make the greatest difference to the lives of local residents.

· Metinvest continued to invest in upgrading healthcare facilities in Mariupol, including by opening a new clinic and funding existing hospitals. The Group has sponsored the upgrades of 16 hospitals, clinics and maternity homes in Mariupol since 2011.

· In February, MetalUkr Holding Limited (Cyprus), a wholly owned subsidiary of Metinvest B.V., transferred 78.31% of Northern GOK, 99.48% of Central GOK, 0.25% of Azovstal and 1.21% of Khartsyzk Pipe to Metinvest B.V. to help the Group to reach its intended structure and improve business transparency and management efficiency.

· From March to June 2014, the Group paid US$15 million for 36% in Black Iron (Cyprus) Limited, which owns licences to develop two iron ore deposits near Kryvyi Rih, Ukraine.

KEY EVENTS AFTER THE REPORTING PERIOD

· In July, the Group entered into numerous transactions with Smart Holding to acquire an effective interest of 46% in Yuzhniy GOK and non-controlling interests of 16.1% in Northern GOK and 14.1% in Ingulets GOK.

· In July 2014, SCM and Smart Holding announced the completion of the merger of their metals and mining assets into the jointly managed Metinvest B.V. The two parties signed a shareholder agreement outlining the relevant and proportional corporate governance rights of each in Metinvest B.V. In addition, to conclude the transaction, Metinvest B.V. issued an additional share in favour of Smart Holding. As a result, SCM’s stake in Metinvest B.V. will be 71.24%, Smart Holding will own 23.76%, and Clarendale Limited (affiliated with the former owners of Ilyich Steel) will retain 5%.

· Also in July, the Group opened a new sales office in Romania, while Metinvest-SMC, the Group’s retail entity in Ukraine, opened new retail warehouses in Kyiv Region and Mykolaiv.

· In the third quarter of 2014, the Group was affected by the conflicts in parts of the Donetsk and Luhansk regions. In particular, the Group has experienced periodic interruptions in its production and supply chains, mainly as a result of logistical and electricity-related issues in the regions. These resulted in temporary suspensions or reduced volumes of production, beginning in the second half of August and continuing to the present. We expect the resolution of the conflict to lead to a restoration of normal production levels.

· In addition, in September, the area of conflict expanded towards the southeastern part of the Donetsk region, up to around 20 kilometres east of Mariupol, where two of the Group’s key steel plants are located. They remain fully operational, but subject to raw material logistical constraints.

· In July, the Group increased its share in Black Iron (Cyprus) Limited to 49% by paying an additional US$5 million, bringing its total investment to US$20 million. Black Iron (Cyprus) Limited and Metinvest retain an option to participate in the developing the Shymanivske iron ore project, representing a potential future investment of up to US$536 million for the Group.

Yuriy Ryzhenkov, Chief Executive Officer of Metinvest, commenting on the results, said: “In the first half of 2014, the economic and political situation in Ukraine continued to pose challenges.

Moody’s Investor Service downgraded Ukraine’s sovereign rating twice in the period: from Caa1 to Caa2 in January and to Caa3 with a negative outlook in April. In addition, from January to April, the Ukrainian hryvnya slid by around 50% compared with the main international currencies. In April, the civil and political instability in parts of Eastern Ukraine – notably some areas in the Donetsk and Luhansk regions, where some of our assets are located – escalated considerably.

Since the end of the reporting period, we have faced ongoing and significant operational risks due to the conflict, particularly in some parts of Donetsk and Luhansk regions, where the situation worsened considerably in July and August. As we have reported, Avdiivka Coke was directly affected by damage to property and electricity transmission lines in July. Employees from the plant and the DTEK power company acted quickly to bring Avdiivka Coke back online to meet the minimum needs of our steelmaking facilities, and production is gradually returning to normal. In mid-August, Yenakiieve Steel temporarily halted its main operations due to damage, and repair works are under way. Operations at Khartsyzk Pipe have been temporarily halted due to damage to railway infrastructure and will recommence once it has been repaired. Production at Krasnodon Coal's mines has been scaled back, also due to damage to railway infrastructure, and will be restored following the necessary repairs. In addition, Azovstal and Ilyich Steel are currently operating at around 50-60% of capacity due to raw material logistical constraints. Throughout Eastern Ukraine, utilisation rates of steel, coal and coke production facilities have fallen.

Given the disruptions to some key sections of our railway network and stations, to maintain the flow of raw materials to our plants and finished goods to customers, our logistics unit has set up a crisis centre in cooperation with Ukrainian Railways and its regional subsidiaries. We are also looking at alternatives, such as seaborne deliveries.

In the event of power cuts or other emergencies posing a threat to our employees, operations or surrounding environment, we have prepared for the potential evacuation of key facilities in the region. While we believe that we have taken appropriate measures to protect our employees and, as far as possible, our assets and supply chain, the situation remains unpredictable. We will continue to provide updates for all of our stakeholders as the situation develops.

In the first half of 2014, revenues declined by 8% year-on-year, primarily driven by declining prices and demand for iron ore products, as well as a drop in sales of steel products affected by lower crude steel production. In addition, the disruptions to our operational performance were minimal. Compared with the first half of 2013, crude steel output fell by 8% to 5,725 thousand tonnes, iron ore concentrate by 3% to 18,011 thousand tonnes and coking coal concentrate by 21% to 2,362 thousand tonnes.

We increased CAPEX by 8% year-on-year to US$272 million in the first half of 2014 as we continued the long-term investments detailed in our Technological Strategy, reflecting our commitment to our strategic vision of building a leading vertically integrated European steelmaker.

Major CAPEX projects in our Metallurgical division included the construction of the PCI facilities at Yenakiieve Steel and Azovstal to boost the efficiency of steel production, construction of a standby turbine air blower at Yenakiieve Steel and replacement of a turbine air blower at Azovstal. In addition, Metinvest continued building the infrastructure for a new air separation unit at Yenakiieve Steel. In the Mining division, we continued installing a crusher and conveyor system at Northern GOK and Ingulets GOK as well as rebuilding the pelletising machines at Northern GOK.

After the reporting period, in July 2014, our two major shareholders, SCM and Smart Holding, completed the merger of their metals and mining assets into Metinvest B.V., which they jointly manage. This streamlines our corporate governance structure; Smart Holding now has three of the 10 seats on our Supervisory Board.

We will continue to keep our investors, customers and other stakeholders informed regarding any disruption to our operations caused by the current conflict. As Ukraine’s largest company, we consider it vital to maintain continuity during this difficult period and be positioned to contribute to economic recovery when the conflict is resolved.”

Commenting on the results, Aleksey Kutepov, Chief Financial Officer of Metinvest, said: “We delivered a solid financial performance in the first six months of 2014, despite challenges ranging from transportation bottlenecks due to adverse weather in the first quarter to a sustained deterioration in the domestic economic climate due to the geopolitical situation in Eastern Ukraine. At this stage, we cannot predict whether there is potential for further disruption, so any potential impact on our full-year performance is unclear.

Regarding the broader market context, the world steel market remains challenging and reflects a mixed global economic situation. While developed economies, including the Euro area and the US, continue to recover, China’s growth rate remains well below pre-crisis levels, as the authorities there have pursued tighter monetary policies. The World Bank estimates that growth in emerging markets will remain below 5% in 2014.

Despite the challenging conditions, Metinvest maintained a stable top line and significantly enhanced EBITDA and net profit, which rose by 29% and 46% year-on-year, respectively, in 1H 2014. The devaluation of the hryvnya and the consequent positive foreign-exchange effect was a key factor in the 29% increase in EBITDA and 46% increase in net profit, with respective margins increasing by 8 and 4 percentage points. While the Metallurgical division’s EBITDA remained positive, the Mining division’s remained the primary contributor in absolute terms.

Part of the reason for this was our ability to divert products among key markets easily. Amid a decline in steel consumption and market capacity in Ukraine and the ruble devaluation in Russia, we re-oriented sales from those markets to the Euro area and the Middle East and North Africa. In addition, in Russia itself, we reduced sales volumes selectively, concentrating on more profitable and closer regions to retain market share.

We continued to focus on streamlining the business by optimising distribution, general and administrative expenses as part of strategic steps to cut costs. Lower raw materials and natural gas costs and foreign-exchange effects contributed to a 20% reduction in the cost of sales.

Against a background of market turbulence and a deteriorating environment for Ukrainian borrowers following two downgrades of the sovereign rating by Moody’s Investor Service, we reduced total and net debt further, by 10% and 5% respectively. This was mainly due to less use of trade finance lines and the scheduled amortisation of bank loans. We also increased CAPEX by 8%, as we continued to invest in our plants to improve efficiency and reduce our environmental footprint.” 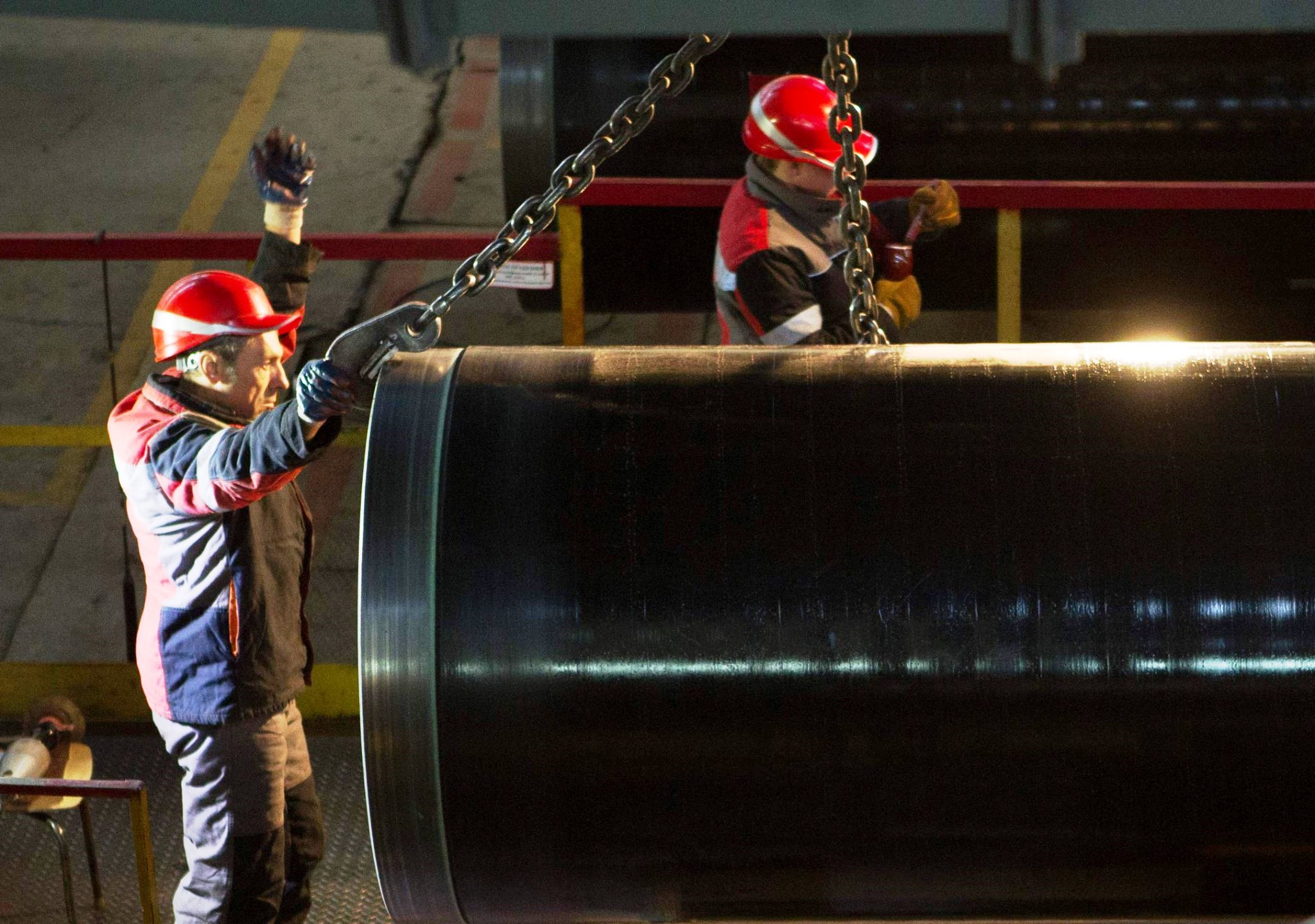