Recently, representatives of the Ministry of Defence of Ukraine made some statements regarding the construction of a corvette class naval ship at the facilities of Chernomorsky Shipbuilding Yard (ChSY), and media publications on the subject have become more frequent. In this connection, the press service of Smart Maritime Group (a shipbuilding holding company that combines Nikolaev (ChSY) and Kherson (KhY) shipyards) considers it necessary to present its position.

ChSY has been executing a public contract for construction of a series of corvette class naval ships, ordered by the Ministry of Defence of Ukraine, since 2009. The construction of the ship in line with the agreed technological schedules directly depends on the timely and full financing of the project from the state budget.

Resolution of the Cabinet of Ministers of Ukraine no. 1150 of 9 November 2011 approved the Targeted State Defence Program for the construction of a series of corvette class vessels under 58250 design project. This Program defined the amounts of financing for the state defence order by years (the total financing at the time of the document's approval was UAH 16.2 billion). In fact, this resolution has never been fully implemented in the part related to allocation of financing stipulated in it.

For the period of 2009-2013, only UAH 215.3 million was transferred to the company within the framework of the contract. The money was mainly used as advance payments under international contracts. In early 2014, the financing of the project by the state was completely frozen ‘due to the military and political situation in the country’, of which the Ministry of Defence officially notified the contractor only in July 2014. In this regard, in October 2014 the company had to stop the work on the project. At the same time, full payment under contracts concluded with other counterparts (mainly foreign ones) for supply of equipment and weapons became impossible. This led to the situation where the shipbuilding company was forced to breach the legislation on foreign economic operations and, as a consequence, to the imposition of fines by state fiscal authorities – about UAH 100 million.

It turns out that the state created such conditions where the shipyard's compliance with the legislation on foreign economic operations became impossible. Moreover, the same state punished the company for that. Forfeits are being charged on these fines. For similar reasons, the company was subject to sanctions by the Ministry of Economic Development, which significantly complicated its foreign economic activity. Today, if the financing is not resumed, it is not possible to obtain the contracted and pre-paid products (including weapons) from foreign partners. Moreover, missing financing under foreign contracts necessitated the renewal of the contracts under new conditions, and, unfortunately, in some cases that resulted in substantial increase of contractual price.

All of the above, as well as the cost of the project’s maintenance and conservation, has become one of the main reasons to start ChSY’s bankruptcy procedure. At the same time, the shipyard continues its core business activity. It has fully retained its production base and highly skilled staff. ChSY is still financing activities for the conservation and safeguarding of the corvette construction project from its own budget. SMG specialists are also in the negotiation process with international suppliers to minimize losses from defaulted contractual obligations.

It should be noted that to date the work on the corvette's hull is 80% complete. The blocks of the hull and the superstructures of the lead ship have been built. In general, the technical readiness of the lead ship is 17%.

According to our estimates, the completion of the first corvette will take about four years. However, the updated and refined work schedule could only be received if the scopes and terms of the financing renewal are re-assessed. The project becomes more expensive every year. According to our estimates, the contract value of the order has risen 2.3 times compared to 2009.

Currently, ChSY and the Defence Ministry are in discussions of the draft changes to the State Program on the Corvette Project, including the changes related to the annual cost estimates for the construction. At the same time, high-ranking officials from the Defence Ministry make statements regarding a possible change of the main contractor for the project. We know that this option was explored, the possibilities were considered to move the project to Public Enterprise 61 Komunar Shipyard (Nikolaev), to Kuznya na Rybalskomu PJSC (former Leninska Kuznya) and other shipyards.

It should be noted that for SMG construction of the corvette is not a commercial project. Implementing this project, the company in fact works at a loss. For us it is first of all the question of the country's defence capability with today's external threats. According to the general opinion of industry experts, the most realistic scenario for implementation of the project is the construction of the corvette at the facilities of ChSY, which is a specialized enterprise of naval shipbuilding, which has the necessary technological base and highly qualified staff.

The company is sympathetic to the challenging situation Ukraine is facing today, but we believe that only the state is in position to give a clear answer to the question of relevance and necessity to develop its own navy. 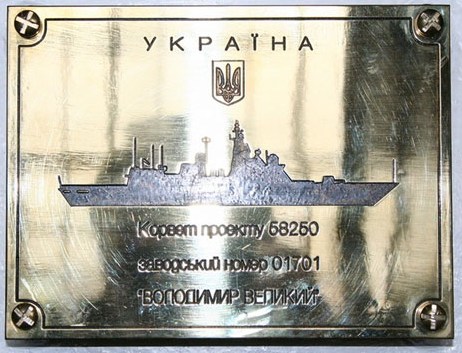