Smart Energy Group suggests creating a register of corrupt law enforcement officers that would contain information about particular executors that carry out culpable orders, fabricate evidence and perform investigative actions in violation of procedural rules to unlawfully press on business. The Group expects that this initiative will be supported by investigative journalists and companies that resist outrage of law enforcement officials.

Smart Energy’s initiative is caused by systematic pressure from law enforcement agencies, which interferes with business activities and hinders proper operation of the Group’s companies. Last week another series of searches was made at the offices of Smart Energy’s companies and at their top managers’ homes. This time an investigator from the Financial Investigations Department of the Large Taxpayers Office, the State Fiscal Service of Ukraine, I.A. Bachinsky and a prosecutor of the Prosecutor General's Office V.L. Levkin see signs of "fictitiousness" in the companies of the Group, which in fact is a nonsensical and far-fetched statement. After all, the companies of the Group operate in a transparent matter and are among the largest taxpayers.

"There is nothing in common between the accusation against the company and reality. The companies of the Group have been operating on the market for quite a while. They have always been open to cooperation and are ready to provide all the necessary documents to the law enforcement authorities. In this regard, we officially addressed the Prosecutor General's Office of Ukraine and the State Fiscal Service repeatedly. We are strongly interested to prove the groundlessness of the accusations," said Sergey Glazunov, Chief Executive Officer of Smart Energy Group.

As for the recent searches and blocking of operations of Smart Energy’s companies by law enforcement agencies, a senior partner of KM Partners law firm Alexander Minin said the following: “Criminal proceedings regarding the alleged fictitiousness of Smart Energy was registered in the Unified Registry of Pre-trial Investigations only on the basis of some analytical note at first, and a completely incompetent "survey" by an employee of the SFS Large Taxpayers Office afterwards. In it, without any tax audits, SFS employee expresses "doubts about the real fact of financial and business operations.” The analytical note of the SFS only mentions names of CEO of one of the Group’s companies – Ukrgazvydobutok – Vadym Mokhov, and Vadym Novynskyi. Everything else is simply assumptions of the analyst without any real evidence.”

Among many other cases, another vivid example of putting pressure on Smart Energy is a criminal case opened by the investigator of Kharkiv local prosecutor's office No.6 of Kharkiv region A.A. Lesnyak against Ukrgazvydobutok PJSC (part of Smart Energy Group) about the violation of the subsoil use regulations through misappropriation of property. Director of the company Vadym Mokhov, who allegedly failed to comply with the State Geological Service’s order to suspend the license and whose actions were then suspended by the District Administrative Court of Kiev, was arrested under the ongoing criminal case with gross violation of procedural rules. At the press conference held in Kharkiv, director of Ukrgazvydobutok said his life was in danger when he was in custody for several days.

"We see a systemic nature in the actions of law enforcement agencies. Pressure on the companies of the Group has been lasting for more than one year now. About 80 criminal cases have already been opened. Yet, most of the opened cases only end up with searches, seizure of documents and equipment. Investigative actions do not go any further. This can clearly be classified as unlawful pressure on business," said Ivan Gerasimovich, Director of Security and Risks at Smart-Holding.

Executive Director of the Association of Gas Producers of Ukraine Roman Opimach emphasized: "During the year, audits and searches have been made both at public and private companies. No doubt, all this affects the work of these companies and puts at risk the implementation of the government program to ensure energy independence, which we are supposed to achieve by 2020. Indeed, instead of increasing gas production companies are forced to "stand up to" law enforcement agencies.” 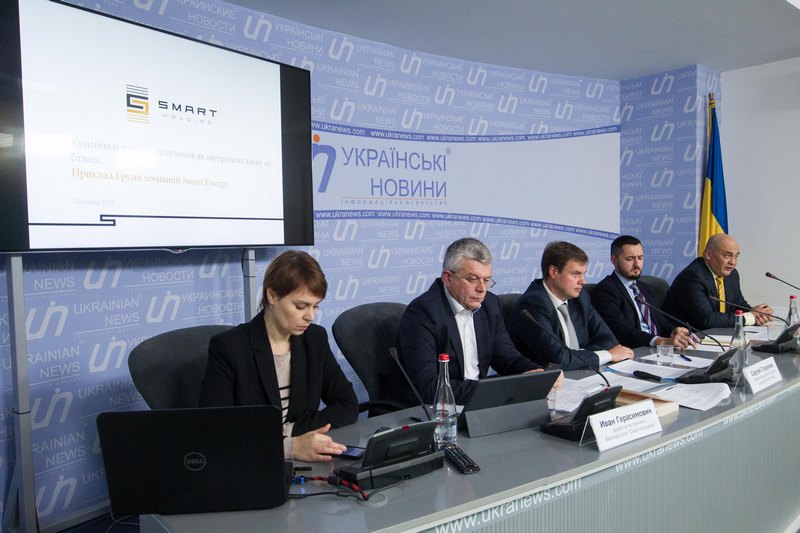