On 7 December 2017, representatives of the Company and Kharkov with You charity foundation handed over specialized laparoscopy equipment to hospital’s surgeons. This is one of the main contemporary methods of diagnostic examination, as well as a surgical operation performed on internal organs. Its distinctive feature is that surgery is made through small openings while a conventional surgical operation requires significant incisions.

"This is extremely important equipment that is used to perform minimally invasive thoracic and abdominal surgeries for wounded or diseased servicemen. This makes it possible to provide specialized medical aid to servicemen and to return them to the ranks sooner," said Colonel Vyacheslav Kurennoy, head of Endoscopic Surgery Department of Kharkov military hospital.

It is not the first time when Ukrgazvydobutok and other companies of the group provide aid to various medical institutions, especially those where our military receive treatment.

“We work in Kharkov region, very close to ATO area, and do realize importance of every project that can help our soldiers. Ukrgazvydobutok’s cooperation with volunteers and Kharkov military hospital started back in 2014. Since then we and other companies of the group have helped to purchase resuscitative, arthroscopic, X-ray equipment that was greatly needed and helped to save lives of many of our soldiers,” said Vadym Mokhov, director of Ukrgazvydobutok.

The company also regularly helps local communities by purchasing equipment for district hospitals. In particular, in 2017 it donated ECG machine worth UAH 48 thousand to Novovodolazhska district hospital. This year, Ukrgazvydobutok allocated a total of over UAH 5 million for various social projects implemented in Kharkov region.

Let us recall that in 2014 companies of Smart Energy Group, Ukrgazvydobutok among them, helped to purchase equipment for Kharkov military hospital to an amount of UAH 2.3 million.

In addition, in 2016 the companies of the group supported the initiative of Kharkov volunteers and transferred UAH 250 thousand to hold Game of Heroes crossfit contest. Uniqueness of this project is that its participants are former ATO servicemen that were badly wounded, but participate in real athletic competitions in spite of that. 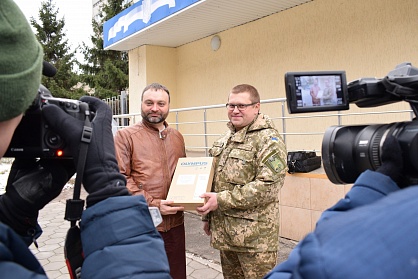