21.09.2018
Over 6 months of 2018 British company Regal Petroleum plc that owns assets in Poltava and Kharkiv regions increased overall production of hydrocarbons by 60% compare to the same time period of the previous year, as it is mentioned in the official statement of the company published at the site of London Stock Exchange.

“Significant increase of total production of hydrocarbons was set in motion by implementation of several successful projects. In particular, in June and August of the previous year well No. 109 at Mekhedivske field and well No.2 at Svyrydivske field were commissioned”, - informed Sergiy Glazunov, CEO of Smart Energy Group.

Also, the company made 38.9 mln USD net profit (0.3 mln USD of losses over the same period in 2017). Such gain was possible due to production increase and the fact prices for the hydrocarbons went up, as well as significant reverse of impairment of the asset value of the company.

The statement also talks about certain changes of the Board of Regal Petroleum. Yevhen Palyenka has left his position as CFO. Non-executive Director of the company Phil Frank resigned and Dmitriy Sazonenko will take over his position.

Regal Petroleum plc is a British AIM-quoted public company, operating in Ukraine through the Representative Office of Regal Petroleum Corporation Limited in Poltava region and LLC Prom-Energo Product in Kharkiv region. The companies own special license for production of hydrocarbons and are part Smart Energy Group. . Whereas, Smart Energy Group is a part of Smart-Holding, in charge of implementing exploration projects, commercial development of the hydrocarbon deposits and alternative energy initiatives. In addition to assets of Regal Petroleum, Oil & Gas business block of Smart Energy is represented by gas producing Ukrgazvydobutok (Kharkiv region).
to news list Energetics Share on Facebook Print NEXT PREV 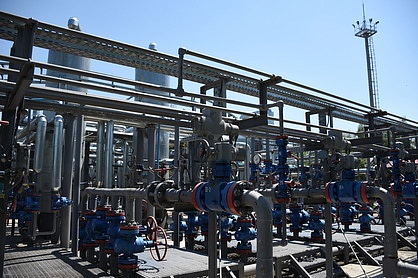