On 26 March, in Lutsk, a Memorandum was signed between Volyn Regional State Administration and Smart-Holding for interaction and commencement of a joint project between business and government authorities Warming a Child with Love initiated by the President of Ukraine Viktor Yushchenko and approved by decree of the President of Ukraine no.1238/2007 dd. 13.12.2007.

The project is based on joint efforts of government authorities and business to solve urgent problems in society, in particular, to address acute issues of large families and orphaned children.

The task defined as a priority of the project in 2008 is solution of housing problems of large families bringing up ten or more children.

By signing the memorandum, Smart-Holding undertook to purchase or to finance construction of housing or improve the living conditions for ten particular families bringing up ten and more children of minority age, in Volyn region.

In turn, according to the deputy chairman of Volyn Regional State Administration Svyatoslav Kravchuk, the signed memorandum ‘will become the document that will give evidence of the mutual responsibility of the regional state administration and Smart-Holding in the course of the project implementation.’ Furthermore, he expressed gratitude to the company for its aid and support rendered to large families: ‘The fact that the business mainly working in the east of the country helps those who live in the western regions indicates that our country is unitary. We see that today business is not only working to gain its profit, but also helps improve lives of our citizens.’

‘We visited all the families waiting for our help, looked at the conditions in which they live. For some families, their existing houses will be repaired, but mostly the aid will be about the construction of new housing. Our next step will be to develop the most appropriate mechanism for implementation of the project that will give us an opportunity to improve the living conditions of these families as soon as possible,’ said the Vice-President of Smart-Holding, Aleksandr Sheyko, during the memorandum signing ceremony.

For Smart-Holding, Warming a Child with Love Project became a logical continuation of the company's social policy. Currently, Smart-Holding is actively involved in the project of Ukraine-3000 Fund and has sent USD 3 million to finance the construction of a new children's hospital.
to news list Social projects Share on Facebook Print NEXT 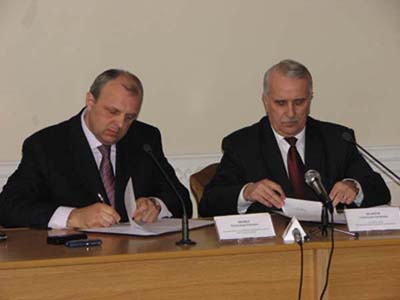