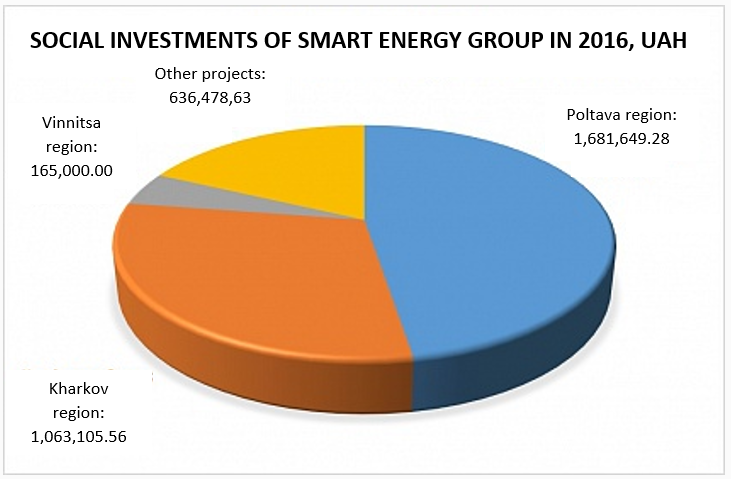 In 2016, companies of SMART ENERGY Group allocated UAH 3.546 million for the development of social infrastructure in the regions where they operate. In particular, social projects amounting to UAH 1.68 million were implemented in Poltava region, to UAH 1.63 million in Kharkiv region and to UAH 165 thousand in Vinnitsa region. The companies also supported several nation-wide projects.

"All the companies of SMART ENERGY Group continuously cooperate with local communities. We, as good neighbours, seek to facilitate the development of social infrastructure in the regions where we operate. All our social investments are focused on specific requests and we are implementing those projects, which are the most needed for local residents, jointly with local authorities," said Sergei Glazunov, the CEO of SMART ENERGY Group.

Thus, last year the Representation of Regal Petroleum Corporation Limited allocated funding to finance the repair of the reception and therapeutic departments of district hospital in Lokhvitsa, to purchase chairs for district community centre of Lokhvitsa, to refurbish the facade of the secondary school in Bezsaly village and to repair water pipelines in Stepuki and Yakhnyki villages, to put into proper shape the porch and the adjacent territory of Yakhnykovskiy village community centre and for other purposes. Overall, the Representation of Regal Petroleum Corporation Limited allocated UAH 1.86 million for the development of social infrastructure of Lokhvitsky and Chornukhinskiy districts of Poltava region.

Besides, the Representation of Regal Petroleum Corporation Limited is the general partner of the educational online service for teenagers e-Space.org. In 2016, the company allocated UAH 375 thousand for programming of the platform and its basic content placement. This project enables schoolchildren from rural areas to join the self-education courses remotely.

Companies of Ukrgazvydobutok and Prom-Energo Product Group rendered support to communities of Kharkiv region. Total amounts of social investments make up UAH 847 thousand and UAH 216 thousand, respectively. In particular, the funds allocated by Ukrgazvydobutok were used for targeted repair and building of a sports-ground for children in Rokitnyanskiy educational centre, for repair of the roof of the community centre building and water supply pipeline in Rakitnoye village. In addition, the company supported non-profit project Pearls of Slobozhanshchina. In September 2016, as part of this project, the first historical and cultural festival Upper Saltov – Alan origins was held. Besides, Prom-Energo Product helped Ternovetskiy educational centre to replace the entrance doors, and granted sports balls and many other items to a local school.

Vin-Pellet Company assisted to Priborovskiy village council and the school, as well as to the First Medical Aid Centre of Lipovets town, Vinnitsa region.

In addition, the companies of SMART-ENERGY Group, for the second time, supported a unique international charity project Classic Fairy. UAH 100 thousand were allocated for organization of the event. One hundred and twenty children from rural areas, whom the companies of the group brought to the concert in Kharkov, got the opportunity to enjoy the wonderful world of classical music. Moreover, funds from the charity concert were used for purchase of electroneuromyography equipment for Kharkov Regional Clinical Hospital for Children, which now makes it possible to effectively diagnose children's neurological disorders.

All the companies of the Group supported the nationwide CrossFit competition Games of Patriots that took place in Kharkov in August last year, and allocated UAH 250 thousand for organization and the prize fund of the event. The project is unique in the fact that its participants are former ATO soldiers who were seriously wounded and whose life activity would have been limited, but they take part in these sports competitions.

Smart Energy is a part of Smart-Holding and a management company in charge of implementing exploration projects, commercial development of the hydrocarbon deposits and alternative energy initiatives.

Smart Energy provides comprehensive consulting services in the areas of management, engineering and business processes optimization to the companies of Smart Energy Group.

Oil & Gas business block of Smart Energy is represented by Regal Petroleum, a listed British company having the assets in Ukraine (Poltava region), as well as by the Ukrainian gas producers Prom-Energo Product and Ukrgazvydobutok (Kharkiv region).

Vin-Pellet is a pilot project of Smart Energy in the field of alternative energy. The company specializes in the production of biomass granules (pellets). The production facilities (plant) are located in Turbov village of Lipovetskiy district, Vinnitsa region. 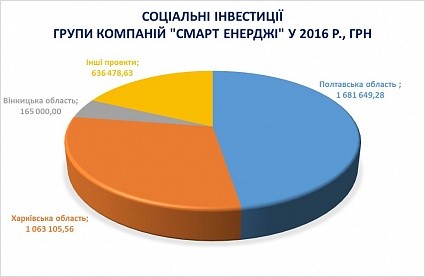